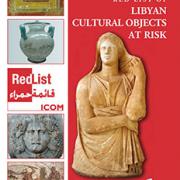 The illicit traffic in cultural goods is not a new practice; however, conflicts in the Middle East (Egypt, Iraq, Syria and Yemen) and Africa (Libya, Mali) have made the problem worse. Entire swathes of cultural heritage have been damaged or destroyed, particularly by ISIS, feeding the networks through which stolen and looted objects travel. In order to fight illicit traffic, we must constantly adapt to emergency situations and new practices, such as Internet sales.

In the face of these challenges, ICOM, which has been committed to the fight against the illicit traffic in cultural goods since it was founded, has developed new tools for gathering information and raising awareness in support of existing national and international laws.

-    THE EMERGENCY RED LIST OF LIBYAN CULTURAL OBJECTS AT RISK
With two rival governments – one based in Tripoli and the other, recognised by the international community, in Tobrouk – the country is in a state of chaos. ISIS has moved from east to west, to Derna, Sirte and Sabratha. ICOM has been monitoring the situation at museums and sites since the beginning of the conflict in February 2011 and supported an in-country assessment in 2012.

The Emergency Red List of Libyan Cultural Objects at Risk was produced by ICOM with scientific support from Vincent Michel (Director of the French Archaeological Mission in Libya, Université de Poitiers) and a group of 12 other experts from Libya, the United States and a number of European countries. It identifies categories of objects at risk, including funerary sculptures and busts – particularly some female funerary busts typical of Cyrene – and objects from the Greek, Punic and Roman periods and the Islamic and Medieval eras, such as coins decorated with the famous silphium, a now-extinct ancient plant.

-    THE PUBLICATION: COUNTERING ILLICIT TRAFFIC IN CULTURAL GOODS – THE GLOBAL CHALLENGE OF PROTECTING THE WORLD’S HERITAGE
This publication, culmination of three years of the Observatory's work, discusses the subject of illicit traffic accurately and honestly. Published in English (and also accessible online), the book is a collection of essays by 14 international experts from a variety of disciplines (archaeologists, academics, curators, lawyers, journalists). With their wide range of backgrounds and experience, the authors address different aspects of the illicit traffic in cultural goods, question the relevance of the instruments that exist to combat it, and raise issues for future consideration.