Back to ICOM tools
print
e-mail 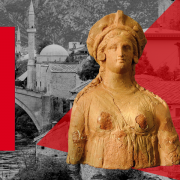 Focusing on 10 countries in Southeast Europe, ICOM worked with experts and coordinators from across the region to create a Red List which features 119 objects from 45 museums from Albania, Bosnia and Herzegovina, Bulgaria, Croatia, Montenegro, North Macedonia, Republic of Moldova, Romania, Serbia and Slovenia.

On 14 October 2021, ICOM officially launched its 18th Red List. While the global pandemic has dampened any expectations for a large-scale unveiling of the Red List for Southeast European Cultural Objects at Risk, it did not stop ICOM’s team of dedicated experts who continued to work remotely across Europe to bring this important heritage protection tool to completion. The first Red List to focus on the European continent, it will also be ICOM’s largest to date.  Not only is this tool a testament to the rich and diverse heritage of the region, but ICOM and its experts sincerely hope it will contribute to alleviating the problem of illicit trafficking of cultural objects.

There is sometimes a misconception that illicit trafficking is a concern that only effects regions in crisis, and while it is true that ICOM has prepared emergency Red Lists for countries in disaster situations, including Haiti, Iraq and Yemen, illicit trafficking impacts all countries regardless of their political or socio-economic situation. Recently – and like many other regions in the world – many countries in Southeast Europe have seen a surge in the online sale of illegal antiquities, and while COVID-19 lockdowns have contributed to increased looting, experts have stressed that the problems had long existed.

Although the recent history of the region has been marked by political upheaval and conflict, which also contributed to the loss of cultural heritage, the contemporary unregulated flow of cultural heritage from the region is something quite different. No country has been free from this blight which has seen objects stolen from museums and other cultural institutions, and archaeological sites damaged through illegal excavations, often carried out by organised criminal groups, but equally by unscrupulous individuals.

Though these threats to the heritage of the region are concerning, ICOM and its experts are not alone in acting to protect heritage. International actors have been engaged in activities in the region to protect heritage. And ICOM continues to encourage the ratification of the international cultural conventions, such as the UNESCO 1970 Convention as well as the UNIDROIT 1995 Convention, as well as bilateral accords between states, which are vital in addressing illicit trade. International cooperation is at the core of the fight against the theft of cultural goods, and many national police forces of the region are party to the joint Europol/INTERPOL/WCO Operation Pandora V which is having success in targeting the illegal movement of cultural heritage across Europe.

The launch of this new Red List for Southeast European Cultural Objects at Risk therefore represents a valuable contribution to the protection of heritage. Not only does ICOM hope this tool will aid police officers, customs officials and private citizens alike in identifying heritage at risk; but ICOM sincerely hopes it will become an important and long-lasting instrument in a growing arsenal of tools used to help protect the rich and valuable heritage of Southeast Europe for all.

More information can be found on the ICOM website.